THE TONE at the top

When energy giant Enron collapsed early this year, it seemed to be an isolated incident of financial malfeasance. But when WorldCom fired its chief financial officer recently for not reporting billions of dollars in expense, the question changed from "How could this happen" to "How widespread is this problem?" Research done at the Penn State Smeal College of Business suggests that it is pervasive. The study looked at how often the Securities and Exchange Commission (SEC) finds irregularities in corporate financial reports. During a period from 1987 to 1992, the SEC found reporting deficiencies in 25 percent of the reports it reviewed.

Does this mean unethical accounting practices are commonplace in a quarter of the corporations traded today? To gain some perspective on this, I spoke recently with Ed Harper, who splits his time between Washington, D.C. and Miami, Florida. For several decades Harper has dealt with finance at the highest corporate and governmental levels. In addition to teaching business and government at Rutgers University, he served on the White House staffs of Presidents Nixon and Reagan, and in the Bureau of the Budget (predecessor to the Office of Management and Budget) during Lydon Johnson's presidency.

Send a comment to the editors
NEXT IN THIS ISSUE
Article
When INVESTING, put GOD first 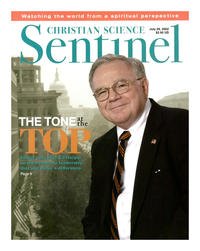