WHEN I BEGAN WORKING as a screenwriter in the film business, the first advice I got was to have a tough skin. Why? Because the shabby treatment of writers in Hollywood is notorious. Recently I saw how effective it is to pray before responding to these perceived slights that appear to be status quo in my industry.

I found myself becoming increasingly angry with a producer I'd been working with on a script. For several days running, he had missed our scheduled phone conferences without calling to cancel. The following day his office would reschedule, and he would miss the call again. A familiar response surfaced—that of being the typical "beleaguered writer." and the resentment grew. I was about to pick up the phone and tell him exactly what I thought about his selfishness, but something stopped me. I realized it was a Wednesday, and that's the day of the midweek meeting at our local Church of Christ, Scientist. 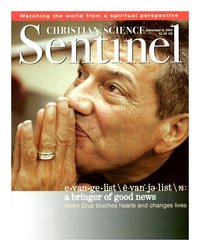