A celebration of healing

IN JUNE 2000, the Church that publishes the Sentinel—The First Church of Christ, Scientist—sent its president on the road to celebrate spiritual healing. William Moody, who lives in Plymouth, Massachusetts, with his wife Whitney, launched out on a year-long series of visits to Christian Science churches in many parts of the world. The goal was to encourage both churches and individuals to discuss healing, share experiences of healing, and help renew their commitment to healing. To find out what each individual can do to help not just himself or herself but also the family, the community, the world at large. Bill and Whitney traveled to Australia, Canada, England, New Zealand, and Scotland, as well as throughout the United States. During the 80 lively meetings he conducted, people told—in words that were sometimes simple, sometimes eloquent, oftentimes moving—just what studying and practicing Christian healing meant to them. of healing

Send a comment to the editors
NEXT IN THIS ISSUE
Article
Dear Mr. Moody ... 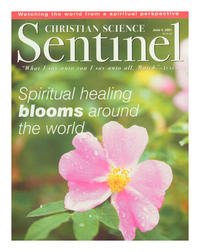