When I was a child, I was very scared of storms. We lived in Missouri, where spring storms were frequent and severe. Many nights, my mother would wake me up, and we'd rush down to the basement, afraid that a tornado was going to strike. I was so scared that the mere appearance of gray clouds made me shake uncontrollably. I was embarrassed by this fear and tried to keep it a secret from my classmates.

I attended Sunday School and learned a number of Bible stories. My favorites were about Shadrach, Meshach, and Abednego, who were saved by God from a burning fiery furnace. And about Jonah, who was saved from drowning after he had disobeyed God's direction and was thrown into the sea during a storm. 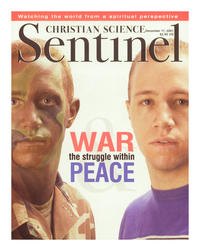