Remove the roots of hatred

Why do they hate us so much?" the headline screamed across the front page of The Idaho Statesman. Readers were still reeling from the September 11 terrorist attacks on the United States. Many were unaware of the depth of animosity harbored by some who feel they have profound grievances against the United States. Since then, thoughtful searching and real efforts to understand have been taking shape.

A lot of the efforts to understand the "why" focus on clashes of religious, cultural, social, or political perspectives. We've seen debates, economic sanctions, diplomatic initiatives, military action. Some of these may prove helpful. Some may not. But sooner or later, more will have to be done. The very roots of hatred will have to be removed—that is, if we want real and lasting security.

We can't talk people out of hatred. We can't bomb it out of them. We can't even be nice enough to them that maybe they won't hate us or try to hurt us any longer. Only when we understand how to dissolve the actual origins of malice will we feel truly safe.

When my friend Margo was helping a schoolteacher with classroom duties, she had a disturbing encounter with a troublemaker. He was a second grader. The more Margo tried to deal with this little guy in class, the more disruptive he became. At the end of one really tough day, she followed him into the hallway, caught up with him, and gently put her hand on his shoulder. He turned to face her and leveled her with three little words: "I hate you!"

That night, Margo prayed. She wanted to understand the kind of love that enabled Jesus to conquer hatred. She thought of his struggle in the garden of Gethsemane before his crucifixion. That struggle has been described as "patient woe; the human yielding to the divine; love meeting no response, but still remaining love" (Mary Baker Eddy, Science and Health with Key to the Scriptures, p. 586). This deeper significance of love—even God as Love—brought Margo a feeling of peace. She even felt ready to face her tormentor.

But the next day that she was in the classroom, the little boy ran up to her and gave her a big hug. Clearly, there was no tormentor.

Compared with world terrorism, this incident is incredibly modest. But there is a connection here, and it can make a real difference. It is possible for the power of God as Love to overturn hatred. What is it about divine Love that makes it capable of utterly destroying hatred? Why isn't our own human love adequate—why can't loads of human love just overwhelm human hatred?

Look at the logic. God is Love. Infinitely pure and perfect, omnipotent, good and spiritual. That's Love's nature. The "carnal mind" is, of course, hostile to anything that defies and denies it. All hatred is, at its root, hatred of God, of divine Love. In other words, any hatred is aimed against the truth that Love is All.

We can't really see this when hate is real and powerful to us. But gaining a consciousness filled with awareness of God's totality renders us capable of facing down malignant attitudes.

Hate is like darkness. Love is like light. When we live our lives with more consciousness of this light, darkness loses its capacity to reach us. And as we begin to see that God is All, that this Light or Love is infinite, the darkness no longer even seems real, and no longer governs or controls our view of others. Jesus knew this. And it gave him ultimate victory over those who hated him.

Margo caught a glimpse of divine Love. It gave her a victory over the hatred that looked real and awful and capable of governing a child. Her prayer caused her to see that hate wasn't an authentic power at all, because God, or Spirit, is the only power.

As we discover that hatred is actually a blind force directed against the power of God and not against us personally, we will disarm and silence it on a more permanent basis. It may be that our efforts begin in the classroom. Or in a relationship with a neighbor, a girlfriend, a husband. Or, these days, we may be called on to begin extracting the roots of hatred on a much larger, even a worldwide, scale. 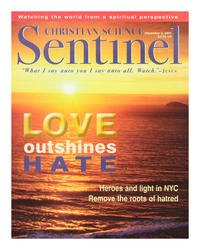