Remove the liability to be ill

"I haven't been sick with anything like the flu for the last ten years."

IT'S A COMMONLY held belief, perhaps even conviction, that anyone, anywhere, is liable, at some time, to have bad things happen to him or her. These are often called the "necessary evils" of life. Believing this to be true would certainly be a justification for feeling helpless. But I've learned that evil in any form is never necessary.

For at least fifteen years, I could count on coming down with flu–like symptoms at least once a winter: Rather than rely on what is most commonly suggested to guard against this ailment—flu shots—I chose a different kind of medicine, and ultimately removed even the liability to be ill. As a result, I can say in all humility (because I'm not the one who makes this possible) that I haven't been sick with anything like the flu for the last ten years. The medicine I turned to is God, divine Mind.

Send a comment to the editors
NEXT IN THIS ISSUE
Article
CLEAR THE MECHANISM! 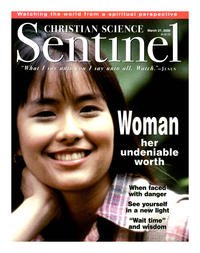