In 1986 I experienced severe back pain, and since I am not affiliated with Christian Science in any way (except by marriage), I attempted to get relief by using the services of a chiropractor. This back condition had persisted for several weeks before I sought these services, and I was very uncomfortable. The chiropractor treated me for a few weeks to the best of his ability, suggesting ways I should sit, stand, and bend in order to cause less stress on my back. When he realized that I was not improving, he advised me to seek medical help, and suggested that I get a CAT scan to pinpoint just what the problem was. From this information, a well-known surgeon at a large university hospital diagnosed the problem as one or more ruptured disks and scheduled surgery for two weeks from that date.

As I was reluctant to have this surgery, my wife suggested that I call a Christian Science practitioner. I agreed to speak to the practitioner, who immediately began treating me through prayer in Christian Science. I spoke with the practitioner nearly every day for about three weeks. She gave me references from the Bible and from Science and Health with Key to the Scriptures by Mary Baker Eddy to read, and I did. Then I stopped calling her. 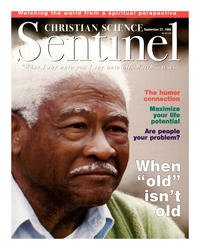