When I was a young mother with four little ones, ranging in age from one to seven, I was widowed. Our financial needs were met when I returned to teaching kindergarten at a school in our neighborhood. With much prayer and treatment from Christian Science practitioners at different times, the children and I were able to feel true joy. Eight years later I met a widower, a Christian Scientist, who had a high-school-age daughter and a son who were not Christian Scientists. After much prayerful consideration, we married and merged our families. My children felt very comfortable calling their new stepfather "Dad." And my stepson was happy to have stepbrothers to do things with, and he immediately began calling me "Mom." But my stepdaughter found it a very hard adjustment, and said she couldn't do that, which I could understand. She was also very opposed to my religion and was concerned that I might insist that she attend a Christian Science Sunday School. When I learned of her fear, I assured her that I would never make her do that. 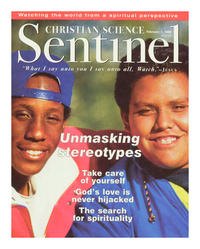