Beyond death and dying: issues of Life

Insights on the life you can never lose

WHEN MY FATHER passed on, I was half a world away helping to conduct a series of meetings at which my continuing presence was needed. My mother had passed away some years earlier, and I heard about Dad's death between an afternoon and an evening meeting. I excused myself from dinner and spent the time quietly praying in my hotel room, and then felt ready for the evening meeting. Later, on hearing of the news I'd received, one of my colleagues commented that when her parents passed on she used it as an opportunity to learn more than ever about God, divine Life.

I decided to do the same. And I did, gaining through prayer and my study of the Bible and Science and Health with Key to the Scriptures by Mary Baker Eddy a clearer-than-ever sense that my father had in no way ceased to live, but had just passed into a different state of consciousness. Although I could no longer communicate with him humanly, I couldn't really lose any of the good that he'd shared with me through his long human life, because it remained right in my consciousness. And the good in our consciousness is ours forever. We can never lose it.

David Driver is a teacher of Christian Science and has been a member of its healing ministry for over thirty years. He and his wife reside in Seattle, Washington. 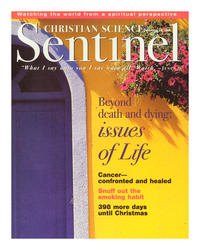