I was invited to travel to a foreign country as part of a small cast of performers. The political situation there was unstable, and many people thought the trip dangerous and unwise. After considerable prayer, however, I decided not to let fear prevent me from doing something worthwhile and I accepted the invitation.

During a concert given to a large, all-male audience of a different race, an innocent comment unexpectedly triggered a violent outburst by a section of the crowd belonging to a radical political group. I took refuge with the other performers in a nearby storeroom whose walls were partitions that went only three quarters of the way to the ceiling. Those outside the walls subjected us to physical intimidation, verbal abuse, and threats against our lives. It was a terrifying experience for four young Australian women who were completely unused to political tensions of that type and totally unprepared to deal with them. 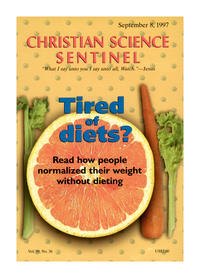