Early in my study of Christian Science, I was experiencing problems...

Early in my study of Christian Science, I was experiencing problems with my ears. Each year, I would have between two and four ear infections, often very serious. Although I received help from Christian Science practitioners, the fear and pain seemed so overwhelming that I would eventually seek medical help. This discouraged me greatly at first because I longed to be healed in Christian Science. I knew that spiritual healing is the only true—and permanent—healing.

I continued to study and pray, using the explanation of ears in Science and Health with Key to the Scriptures by Mary Baker Eddy: "Not organs of the so-called corporeal senses, but spiritual understanding" (p.585). Daily I strove to develop spiritual understanding by listening carefully to God's angel thoughts and striving to separate the chaff from the wheat in my thinking. Through this process, many character flaws were discovered and healed, and the ear problems gradually subsided until they finally disappeared altogether. The healing has been permanent.

Send a comment to the editors
NEXT IN THIS ISSUE
Testimony of Healing
Recently, I was in our Christian Science Reading Room, and I... 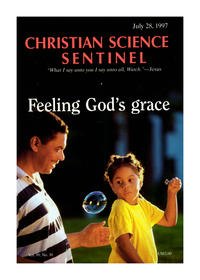