One morning when I was ready to go to work I was seized by...

One morning when I was ready to go to work I was seized by a severe pain in my side. I went straight to bed and called a practitioner, who immediately began to treat me through prayer. The pain grew worse, however, and I made a number of telephone calls to the practitioner, who each time assured me that there was no reason for me to suffer. Finally, late that afternoon there was relief. I felt no pain and was greatly pleased.

Later that night, however, the pain returned. I called the practitioner again. After several hours I realized that I had been thinking to myself, all she needs to do is take the pain away. Just make me feel better. Then I began to change what I was praying for. I wanted to know what I needed to learn.

Send a comment to the editors
NEXT IN THIS ISSUE
Testimony of Healing
One Sunday morning, when I woke up very early, I was unable... 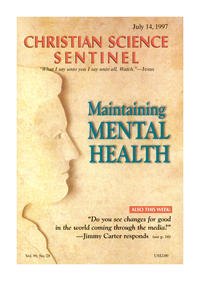