On January 7, the highest court in the Commonwealth of Massachusetts took up the question of court intervention in internal church affairs. It's an issue raised by a suit brought by two church members against current and former officials of The First Church of Christ, Scientist, in Boston. The seven justices of the Supreme Judicial Court heard arguments and questioned attorneys about the appeal to end the case.

We report on a meeting at which church employees were informed about the hearing. It was held in the Original Mother Church Edifice. 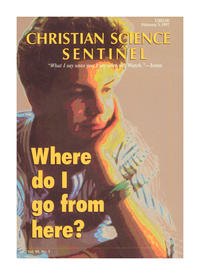