Can bad weather make you sick?

A Raincoat and an umbrella offered little protection for me that windy, wet day a couple of years ago. My husband and I were in Poland with a raindrenched group, splashing across an ancient city square.

My feet became colder and wetter as I dashed through deep puddles, and I realized that I had a choice: I could think of this situation as one where I might become ill—or I could refuse to be affected by such conditions. I chose the latter and began to pray in a way that affirmed what I knew was true about all of God's children, and therefore about me. I also put out of my thought anything that was not true according to my understanding of God's and His creation. 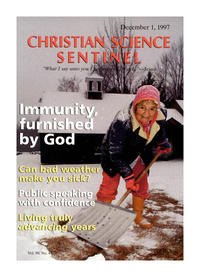