During the course of my twenty-five years as a practicing Christian Scientist...

During the course of my twenty-five years as a practicing Christian Scientist, I have had more healings than I can count. Some were physical healings, and equally as many involved difficulties with relationships. I would like to tell of one physical healing that stands out, and that took place early on.

I began to have difficulty walking because of growths under the skin of one foot. I was told that they were plantar warts, and that surgery was the only way to remove them, although I never sought a doctor's opinion. I communicated several times with a Christian Science practitioner, who prayed for me, and I endeavored to put into practice all that I learned from studying the Bible and Science and Health.

Send a comment to the editors
NEXT IN THIS ISSUE
Testimony of Healing
In June of 1995 early one morning I was suddenly overpowered... 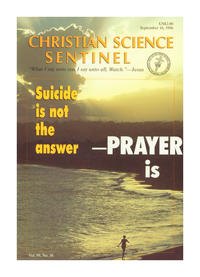