A language for world peace

Christian Harder and his Italian wife Daniela are professional translators and interpreters who share an office in their apartment in the heart of Trieste, Italy. In their home, they use three languages—English, German, and Italian—depending upon which is most appropriate to the circumstances.

Mr. Harder was born in Texas in the United States, but has lived in four other countries—the Philippines, Austria, Hungary, and Italy. He studied linguistics and international relations before becoming established in Europe as a private language teacher and translator. In addition to the languages already mentioned, he is fluent in Hungarian, and is "comfortable" in four others—Dutch, Afrikaans (South Africa), French, and Swedish. He taught himself to speak all of these languages except English and German, which he calls his "native languages."

Send a comment to the editors
NEXT IN THIS ISSUE
Editorial
Anger? Healing? Which will you choose? 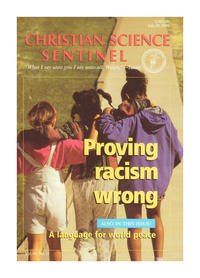