World friendship and the Olympic Games

When the Olympic Games convene in Atlanta, it will be the largest international event of a peaceful nature taking place in the world. The most nations in Olympic history, 197, have been invited to participate, and for the first time, all have accepted the invitation. The global interest is enormous, especially when you take into account the television audience.

Those involved in preparations have called for a worldwide truce from hostilities for thirty days before and after, as well as during the Games.

Send a comment to the editors
NEXT IN THIS ISSUE
Article
Key to healing: seeing the spiritual fact 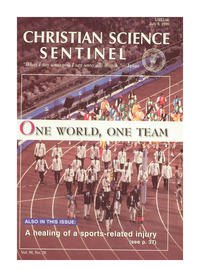