A MESSAGE FROM A TEENAGER

Sharing Science and Health for the first time

I had an experience, which I would like to share, regarding an extra copy of Science and Health by Mary Baker Eddy, and the landscape that opened up before the eyes and heart of a dear friend of mine.

This individual, who has been my boyfriend for over a year, was among the few people in my philosophy class who claimed to be atheists. One day I was talking to him about this view. He said that the reason he didn't believe in God was not that he did not want to, but that the existence of God had not been proved or shown to him. If God would show Himself to him, my friend said, he would gladly accept Him with open arms. He also mentioned that he felt a great void in his life, and he wouldn't rule out the possibility that the feeling of lack was due to not really having a religion he truthfully felt was his own. 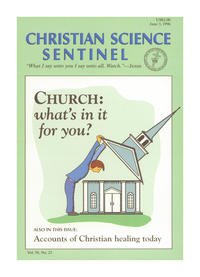