According to doctors, our daughter suffered from posttraumatic...

According to doctors, our daughter suffered from posttraumatic epilepsy, possibly due to a severe blow which she had received to her head from an accident years before. At the time there were no apparent serious injuries, except for a crack in the collarbone that had mended right away.

When three years later she began to have convulsions, the doctors treated her, but without any improvement. The medical prognosis wasn't encouraging, and even with medication the convulsions continued. This was a time of much sadness and anguish in my heart.

Send a comment to the editors
NEXT IN THIS ISSUE
Testimony of Healing
A few weeks ago my husband and I spontaneously expressed... 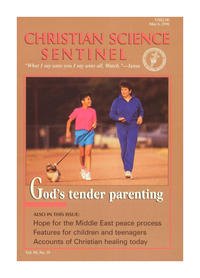