The recent heartbreaking events in Israel plead for radical reliance on the deep religious heritage of Jews, Arabs, and Christians joining in the peace process or looking on with compassion from afar. All three groups trace this heritage back to the patriarch Abraham and his break with pagan superstition to honor one God. They all—we all—possess the spiritual resources to turn from the bloody results of a divisive tunnel in Jerusalem to the healing landmark of Abraham's reverenced cave.

The tunnel is an archaeological one. Violence came when Israel opened a new entrance to it near a mosque. The cave and a field were bought in Hebron—historically seen as Abraham's first clear ownership of part of the Promised Land. There his two sons came together to bury him—Isaac, continuing the Hebrew line; and Ishmael, ancestor of the Arabs. 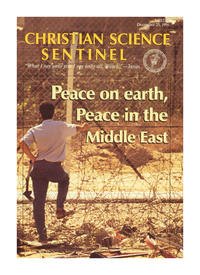