Last October, the Christian Science churches in Dallas, Texas, sponsored five public events and arranged three television broadcasts to encourage racial harmony in their community. The week-long program included two Christian Science lectures; a panel discussion on "Praying About Prejudice"; a recital by coloratura soprano Osceola Davis; and an address to civic leaders (to which the general public was also invited) by Melba Beals. Ms. Beals told how, through faith in God, she overcame the racism and prejudice she had experienced as one of the students who helped to integrate little Rock Central High School in Arkansas in 1957.

Ms. Beals, whose experiences as a civil-rights advocate have been chronicled in her latest book Warriors Don't Cry (Pocket Books) and in a forthcoming big-screen movie, spoke with the Sentinel shortly after the Dallas gathering. 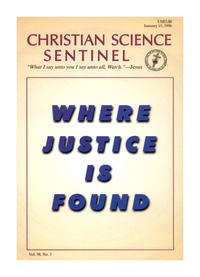