Exploring the issues of womanhood

Women's issues will be the focus of two special international meetings in China in the next few weeks. The NGO [nongovernmental organizations] Forum on Women will be held August 30 to September 8 and the United Nations' Fourth World Conference on Women will run from September 4 to 11. Approximately 1,300 nongovernmental organizations from nations around the world are expected to attend the NGO forum. At the time of this writing, controversy surrounded the site of the NGO conference, brought on—some analysts believe—by China's fear that the emphasis on human rights will arouse the small women's movement in that country. There also has been some concern that the meetings could become bogged down with debate over reproductive rights rather than providing a rich opportunity for women to speak publicly on a wide range of issues they care deeply about. Regarding this last point, we thought of these words from Miscellaneous Writings by Mary Baker Eddy: "When the heart speaks, however simple the words, its language is always acceptable to those who have hearts" (p. 262).

In the two articles that follow, the Sentinel offers some thoughts by women about issues that they have had to deal with in own lives. Through Christian Science, they have found healing solutions that not only helped them but made a difference to others as well. 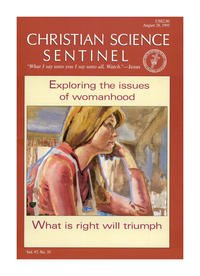