I had just returned from taking my husband to the airport for a business trip when he called to say that his flight had been canceled because of dense fog. All the passengers were going to be transported by bus to another airport not so affected by the fog. This change in plans was a relatively small interruption of his trip, but recent news reports of accidents attributed to this kind of fog made me feel concern for his safety. My husband and I spoke of the importance of reassuring ourselves of God's ever-present care and guidance in all situations. As I turned from the phone, I thought, "We are always safe with God, because there is never a moment when we could be separated from Him." God is the creator of the universe, including man, and that is where we live—in God's universe. The Bible refers to God as Spirit and to man as God's offspring, His likeness. Man is spiritual, not material, reflecting Spirit. As a result of man's relationship to God, man is always safe and sound. 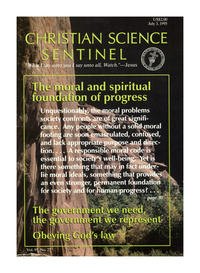