In the face of a personal crisis or a larger disaster, like the bombing in Oklahoma City last April or the terrorist attacks on the Tokyo subway system, many issues obviously demand immediate attention. Others, though, may require longer-range commitments—things like rebuilding people's lives or their communities, reestablishing a sense of security, healing the grief or fear or deep-seated anger that can follow a tragedy.

After the Oklahoma bombing, there was talk of permanent trauma that families and residents in Oklahoma City, and throughout the United States, might have to learn to live with. Even when commentators noted positive signs of progress or a growing sense of caring and unity among people around the country, reservations remained about the possibility of actually healing the long-term traumatic effects of such a horrendous incident. 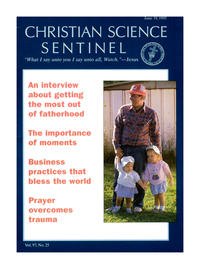