Come out from oppression: be governed by God

The other night I was reading the Bible account of how Saul was chosen as the first king of the Israelites. Up until Saul's anointing by the prophet Samuel, the Israelites had been governed by the law itself, upheld by the judges, whose role it was to guide the people. But in 1020 B.C., partly in reaction to the corrupt behavior of Samuel's sons, whom he'd appointed judges, the people demanded a king to rule over them.

Displeased with their request, Samuel pointed out how much freedom they would be sacrificing in purposely subjugating themselves to a king. But the Israelites refused to accept his arguments, and Samuel finally gave in. 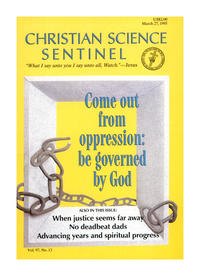