When Christ Jesus healed a palsied man by destroying sin, he said, "Son, be of good cheer; thy sins be forgiven thee" (Matt. 9:2). This incident, like Jesus' parable of the prodigal son, illustrates our heavenly Father's healing, redemptive love. In the parable, a destitute son, having squandered his life on sin's empty promises, humbly returned home, and the ebullient father welcomed him with open arms. Why had the son left home in the first place? Had he been deceived by sin's fraudulent guarantee that you can sin now, and only later do you have to pay?

One view of sin is that at least it is pleasurable now—even though it may be paid for later by severe punishment. Christian Science refutes this supposedly delayed accountability. "Sin is its own punishment," states Mary Baker Eddy in Science and Health (p. 537). Christian Science makes it clear that sin is never actually pleasurable. It shuts out life and true happiness now by hiding the true view of God and man, including goodness and joy. Sin has no harmony, involves no love of God or man. Self-gratification, for instance the belief that one can use others for sensual advantage, obscures one's integrity and dignity with a delusion, a dream of pleasure and pain in matter. Such indulgence is, the Bible says, as "when an hungry man dreameth, and, behold, he eateth; but he awaketh, and his soul is empty" (Isa. 29:8). How like sin! It satiates but never satisfies. It sets up a craving for more until it is destroyed by suffering or by the true understanding of God in Science. 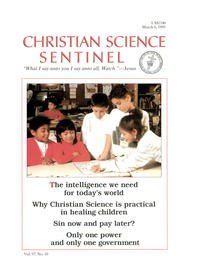