Healing of a hard life

Trying to get free of a shameful past can seem overwhelming. Past events seem so concrete and unchangeable! Yet a troubled past can, and must, be overcome if we are to achieve true happiness. Someone close to me proved this through her study of Christian Science.

She had had a tragic life. Her brother, for a time, had sexually abused her when she was a young girl. Her mother beat her constantly and abused her verbally. The man her mother lived with on and off for twelve years during my friend's childhood attempted to rape her. Even after she reached adulthood and was a mother herself, she was not free of her mother's efforts to hurt her and control her life. She felt like a war victim. Uneducated and unskilled when her husband deserted her and her children, my friend suffered financial devastation, including the foreclosure of their home and repossession of her car.

Send a comment to the editors
NEXT IN THIS ISSUE
Article
No beginning, no ending, no boundaries 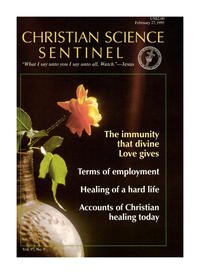