It was the summer of 1993, and I had been at camp for young Christian Scientists for about a week. I had chosen the fishing trip with most of my friends. While we were down in a creek searching for crawdads, we started a mud fight. I was running along with one of my friends and I ran into some barbed wire. At first I yelled out, and then I yelled very loud that God was Love. Everybody who was around me calmed down to pray. I got loose from the barbed wire and walked back to the entrance of the creek. During that time I was saying the Lord's Prayer over and over again. The counselor cleaned the cut and put a bandage on it. Later in the day I went down the water slide and the bandage fell off. There wasn't much left to the cut. Later that week it was completely gone.

During that week I had to learn how to look away from matter to God. The loving care of everyone at camp helped me, and that summer turned out to be my best year of camp. 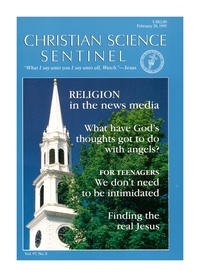