Forgiveness is not merely an act

Forgiveness as expressed in the life of Christ Jesus is a way of life, a state of being. It not a sometime thing, to be called on only to meet a circumstance or to satisfy a conscience. When our Master incorporated "Forgive us our debts, as we forgive our debtors" into his all-encompassing Lord's Prayer, he followed it up with a firm admonishment: "For if ye forgive men their trespasses, your heavenly Father will also forgive you: but if ye forgive not men their trespasses, neither will your Father forgive your trespasses" (Matt. 6:12, 14, 15).

Just as Jesus' love was unconditional, so was his forgiveness. When he forgave all mankind for his crucifixion, its cruelty and injustice, he expected this same spiritual magnanimity from his followers. When Peter asked if seven was enough times to forgive someone for a wrong done to one, Jesus replied for all time, "I say not unto thee, Until seven times: but, Until seventy times seven" (Matt. 18:22).

Send a comment to the editors
NEXT IN THIS ISSUE
Article
God's loving gift: the Ten Commandments 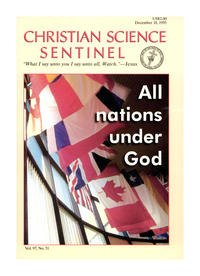