It was the first day of my sophomore year at college. "Sarah!" three young women shouted in unison as I rounded the corner of the hall, suitcase in hand. Two of them were friends of mine from the year before—Amy and Heather. The other woman was Stacy, the only student remaining from the previous year on my dormitory floor, though I didn't know her well.

I did know that Stacy was a Christian Scientist, and I was curious about that, since I only knew that Christian Scientists didn't go to the doctor when they got sick, and didn't drink alcohol, or smoke. I had heard that some were accused of abusing their children by not seeking medical treatment. I had a relative who was a Christian Scientist, but since I had a grandfather, great-grandfather, three uncles, two aunts, and now one sister and my mother, all in the medical profession, I had never considered that there was any real alternative to medical treatment. 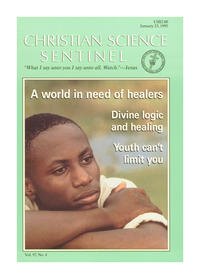