I have benefited from the effectiveness of Christian Science...

I have benefited from the effectiveness of Christian Science healing from earliest memories. When about ten, I found one of my front teeth suddenly turned black. It remained that way for several days, and my mother encouraged me to pray about it. From that time I held constantly to the idea that I was God's perfect, spiritual idea—something I had learned in Sunday School. A few days later on waking up in the morning, I found the tooth back to its normal color. That healing served as an introduction for many more.

After I joined the Army I had difficulty finding a job in which to complete my tour of duty. I accepted a post photographer job because I knew I would be stationed in one place for at least a year, which would allow me to join a Christian Science branch church and hopefully gain a little more understanding of the religion. I talked with local Christian Science practitioners, seeking to become more settled and to be more decisive in my thinking. One of them suggested that I go through the alphabet daily, finding attributes relating to the synonyms we have for God by asking myself questions such as, "What does it mean to me that Soul is able? What does it mean to me that Principle is beautiful?" etc. This would keep me mentally busy most of the day, reasoning out what each different question meant. This helped me considerably while stationed at that metropolitan military post, and also later when I was transferred overseas for one and a half years. My military experience became very enjoyable and rewarding.

Send a comment to the editors
NEXT IN THIS ISSUE
Testimony of Healing
One day when I was in high school, I discovered I had misplaced... 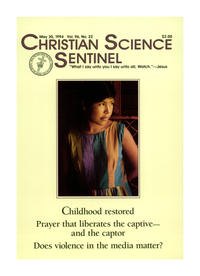