Notice from The Christian Science Board of Directors

The press has reported widely that two individuals and a group called Members for the Manual, Inc., which was incorporated on December 21, 1993, filed a suit in Suffolk Superior Court in Boston, Massachusetts, on December 30, 1993, against current and former officers and employees of The Mother Church.

The papers filed with the court state that the plaintiffs wish the court first to require a full accounting of the Church's finances, especially those connected with its media activities. Second, they ask the court to require the Church's Committee on Finance to act unanimously when endorsing the payment of bills in accord with the Manual of The Mother Church by Mary Baker Eddy. Third, they allege that church officers and other employees have breached their duties under the Deed of Trust of The Christian Science Publishing Society and the Church Manual. In addition, discussions since the filing of the papers indicate that they feel the current organization of the Church is inadequate and that a representative group of members should be established to monitor or oversee future activities of The Christian Science Board of Directors.

Send a comment to the editors
NEXT IN THIS ISSUE
Testimony of Healing
I Know no way to explain the harmony, confidence, and Spirit... 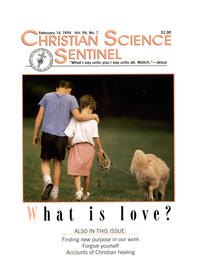