Do you know the game where you try to make four equilateral triangles with six matches? People sometimes will spend hours before finding the solution, but it is worth the effort. It was a useful experience for me. At first it seems impossible: four triangles, equal sides, equal angle, with only six matches!

As long as one limits himself to moving the matches around on a surface, no solution can appear. But if one adds a third dimension, reasoning in volume and not just surface, the solution appears quite simple. One obtains a pyramid, the base consisting of three matches, the other three rising from each angle and joining at the summit. Seeing this pyramid springing up, one feels a joy, a sense of liberation. I often think back to this experience when confronted with a problem that seems unsolvable.

Send a comment to the editors
NEXT IN THIS ISSUE
Article
Just some, or our whole trust in God? 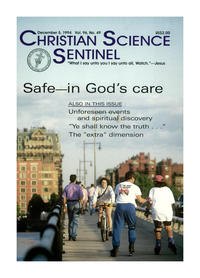