We are not governed by chance

Feeling lucky? Cursed? We can discover safety and reliable good through a better understanding of God.

During the mid-1970s I was stationed with the United States military in a European country. At that time there was a great deal of terrorist activity, directed against the U.S. military in particular. A number of random bombings had taken place, as well as kidnappings. Because of the surprise nature of these attacks, a feeling of helplessness seemed to prevail on the base where I was stationed.

In the face of this daily threat, my wife and I prayed to see God's thoughts of peace toward His creation as a governing, provable divine law. This was not easy. A common feeling on base was that if it's "your turn to go," there's not much you can do about it. It was felt to be virtually impossible to defend oneself against terrorist activity in that largely open society. 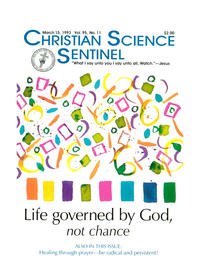