Even in the face of humanity's most severe challenges, prayer is a powerful, practical help.

Humanity's future, many experts argue, hinges on whether population growth will outstrip earth's resources. An in-depth report titled "World Population" in The Christian Science Monitor observed, "Without major technological breakthroughs and changes in patterns of consumption, even the most optimistic population-growth projections are likely to be accompanied by increases in poverty, hunger, and environmental degradation" (July 8, 1992). These distressing conditions already exist in many parts of the world.

Our response to threats to humanity's well-being is immeasurably strengthened by prayer. Indeed, heartfelt and searching prayer is itself a resource. It opens our thought to a greater recognition of God's presence and power to bless mankind. 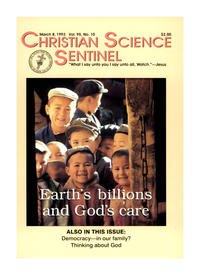