No false witnesses to sin

Seeing man as spiritual, made in God's likeness, doesn't ignore sin—rather, it reveals to us (and the sinner) the reality of God's love for all.

Several years ago I thought some dear respected friends were acting in a very unjust, unkind, and unethical way. Because I knew them so well, I expected better, and that made their actions especially troublesome. I can see now that what my friends were doing rates pretty low on the scale of sins of which mankind is capable, but their actions set me to thinking about sin.

The first thought that came startled me. It was, "Sin is its own punishment," a statement Mrs. Eddy makes in Science and Health. How could that be? The sinners were succeeding, and there was no sign of punishment. Almost immediately I realized that because sin dulls our spiritual perception, it delays the day of full salvation, the time when we will have understood and proved the supremacy of God over all evil. As Science and Health says: "Error excludes itself from harmony. Sin is its own punishment" (p. 537). 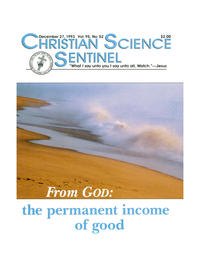