In The First Church of Christ, Scientist, and Miscellany, Mary Baker Eddy...

In The First Church of Christ, Scientist, and Miscellany, Mary Baker Eddy wrote: "Beloved Christian Scientists, keep your minds so filled with Truth and Love, that sin, disease, and death cannot enter them." Several years ago I learned the importance of following this counsel.

A very inharmonious situation arose at my workplace. I worked in a small group of people; we had always been very close, almost like a family. But suddenly our boss began to treat one co-worker badly. The atmosphere in the office became very tense. Finally, this individual could take the mistreatment no longer and decided to retire early. This woman was a single parent with children still in school and had intended to continue working for a while longer. Although I had always had very loving feelings for my boss, I began to resent her so much that I once remarked I could never forgive her for what she had done to my co-worker.

Send a comment to the editors
NEXT IN THIS ISSUE
Testimony of Healing
When I was a child, my parents separated and became rivals... 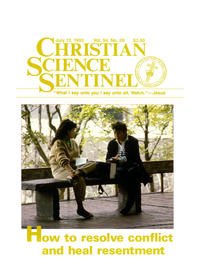