Just one hundred years ago, a small band of ardent Christian Scientists met to establish The Mother Church in its present form.

According to the Manual of The Mother Church by Mary Baker Eddy, "On the twenty-third day of September, 1892, at the request of Rev. Mary Baker Eddy, twelve of her students and Church members met and reorganized, under her jurisdiction, the Christian Science Church and named it, The First Church of Christ, Scientist." There were some notable differences between the earlier Church and the reorganized Church of 1892. For example, the Church Mrs. Eddy chartered in 1879 was known as "Mother's Church." She had been ordained as its pastor. On the other hand, the reorganized Church was destined to be governed by the Church Manual, the body of By-Laws she would begin publishing in 1895. It was to be The Mother Church for a worldwide congregation. 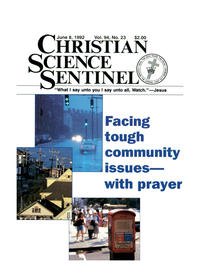