United by our common heritage

Enduring unity is built on a higher, spiritual concept of what man is.

By the end of this year the twelve European nations forming the European Economic Community will have taken significant steps toward a more united Europe. Winston Churchill said prophetically in 1946 in Zurich: "If Europe were once united in the sharing of its common inheritance, there would be no limit to the happiness, to the prosperity and glory which its three or four hundred million people would enjoy." He said further, "We must build a kind of United States of Europe. ..." "The process is simple. All that is needed is the resolve of hundreds of millions of men and women to do right instead of wrong and gain as their reward blessing instead of cursing."

How will even the initial stages of greater unity come about? If progress is to be enduring, it can't be approached simply from the standpoint of economic perspective alone. Those would not inspire people to do "right instead of wrong." Instead we need to see something of our common heritage, see what this really means and put it into practice. This heritage includes the Judeo-Christian faith in one omnipotent God who governs the universe in righteousness and order. 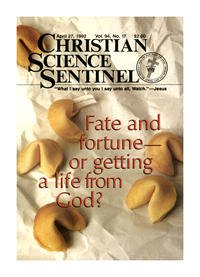