The following letter arrived one year ago, at the height of the war in the Persian Gulf. Though that brief war seems "old news" to millions of people now (though not to the families who lost a loved one), only twelve short months ago it riveted the attention of the whole world.

This letter is from a television journalist. Somehow the writer's observations about spiritual reality being "where the action is" seem even more relevant today as we think about the meaning of news and journalism.

Send a comment to the editors
NEXT IN THIS ISSUE
Editorial
"The angel of God, whose I am, and whom I serve" 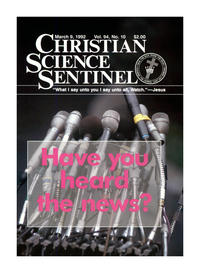