Many of us at some time in our lives have experienced a feeling of being helpless. The feeling has surged in, and then we've drawn the supposedly logical conclusion. But later, when more perspective has returned, we've realized we weren't really helpless. There was something we could have done, even when things seemed at their most difficult. In other words, the problem had been not so much being helpless as feeling helpless.

One thing that tends to wake people up is realizing that all too often when they succumb to thinking they are unable to help themselves, they're not even thinking their own thoughts. They are responding to a general atmosphere of thought. As the author of "Not helpless after all" points out, "Helplessness may be a popular attitude, but it is not immovable fact. ... God is good, and He is the only true power. There isn't another power, one that can force you to take the road of defeat or disgrace." 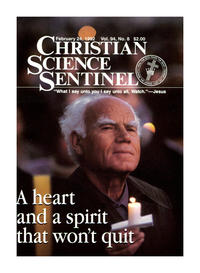