Christian Science has been a source of support and strength...

Christian Science has been a source of support and strength all my life. When I was an infant, my father was healed of a disease considered incurable. After that my mother became a devoted student of Christian Science. My sisters and I had a happy and healthy childhood, which I took for granted. However, later there came a time when I had to prove the efficacy of this method of spiritual healing for myself.

While I was teaching in a business school in a stressful environment, I developed a nervous disorder. During this time I was in regular contact with a Christian Science practitioner, who prayed for me, and I was never absent from my work. Total freedom from the nervous disorder took some time, but it was a period of much spiritual growth.

Send a comment to the editors
NEXT IN THIS ISSUE
Testimony of Healing
A short time before my mother was to be married, she became... 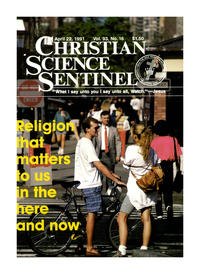