Mary Baker Eddy, who discovered and founded Christian Science, always took a keen interest in education. She conducted a school for young children for a short time and taught occasionally in the New Hampshire Conference Seminary when other teachers were absent. She read and spoke and wrote on topics of public interest before she discovered Christian Science.

Mrs. Eddy had a high regard for education and culture that elevate thought, yet her concept of learning did not rely on processes of the human mind; rather, she saw its true purpose was to free the human mind from self-imposed restrictions so that thought could advance morally and spiritually out of the limitations of matter. True education, as she saw it, was not so much an accumulation of knowledge; rather it was an imparting of spiritual knowledge—a disclosure of the scientific facts of the divine Mind, God, and His idea, man. 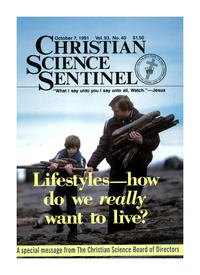