I can remember as a young girl questioning why nobody...

I can remember as a young girl questioning why nobody healed as Christ Jesus said we should. I had never heard of Christian Science, but even as a child I felt something was missing from Christianity if there was no healing. After I was married and had two children, my desire to know God became fervent. I wanted more than anything else to teach our children the highest sense of what is right. I studied several religions.

Send a comment to the editors
NEXT IN THIS ISSUE
Testimony of Healing
When I was three years old I was taken ill with diabetes, and... 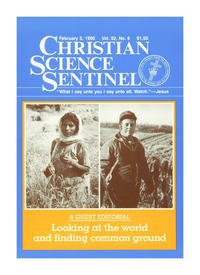