When Snooky was about three, we were living in a little house built around a country store which I owned and operated. One morning Snooky and I were in the store when the bread man brought in the bread and put it on the top shelf of the rack. Then he brought in an armload of cakes and put them on the lower shelf.

After he had gone I was at work stocking some shelves and noticed that Snooky had gone over and put her hand on the middle of one of the cakes and had pushed it down real hard. I "No, no," I told her, and she turned and started to walk away. I went back to work. Then I happened to look toward the rack and Snooky was mashing another cake. I quickly went over and said "No, no, Snooky. See, you have ruined the pretty icing, and now we will not be able to sell the cake."

Send a comment to the editors
NEXT IN THIS ISSUE
Testimony of Healing
About two years ago my husband and I were visiting a niece... 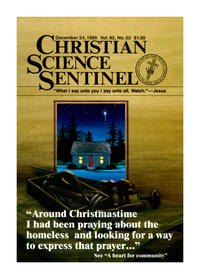