We need enthusiasm. But what should we do when enthusiasm drives, instead of just animates, our activities?

As a little boy, Theodore Roosevelt regularly attended church with his family. But during one period, he was actually afraid to enter the church. His mother naturally wanted to know why. "He was terrified, she discovered, of something called the 'zeal.' It was crouched in the dark corners of the church, ready to jump at him, he said. When she asked what a zeal might be, he said he was not sure, but thought it was probably a large animal like an alligator or a dragon. He had heard the minister read about it from the Bible" (David McCullough, Mornings on Horseback).

Using a concordance, they found the passage in the Bible that had caused the boy such concern: "And his disciples remembered that it was written, The zeal of thine house hath eaten me up." 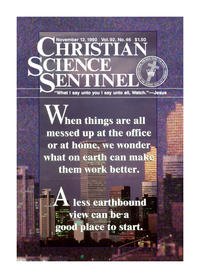