Where can we find true security?

In a society where crime and violence are apparently on the increase, security becomes a growing concern. Even when we have relative personal safety, we live in a world where hostility among nations has built up a formidable array of destructive weapons.

So where can we look for a greater measure of security and freedom from fear? Many people have found the Bible is a good place to begin. It gives us examples of people who have turned to God and found protection from threatening situations, not just from anxieties but immediate danger. In the Old Testament, for instance, we read the story of the prophet Elijah, who, when his life was threatened by Queen Jezebel, fled into the wilderness and was sustained there for forty days. See I Kings 19:1-8 . The New Testament tells us that when the Apostle Paul was stoned by an angry crowd and was left for dead, the disciples stood around him until he was able to get up, fully recovered, and go back with them into the city. See Acts 14:19, 20 .

Send a comment to the editors
NEXT IN THIS ISSUE
Testimony of Healing
In recent years the media have provided the public with an abundance... 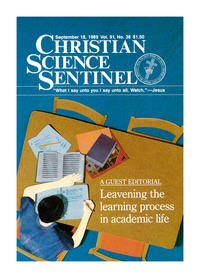