Have you ever picked up a book of famous quotations, especially one that was written, say, a half century ago? Here's an interesting statement that appeared in a 1937 edition of such a book: "'Tis hard to find a man of great estate,/That can distinguish flatterers from friends." Whether one is of "great estate" or not, the distinction is certainly worth considering.

I doubt that people have ever of heard of Wentworth Dillon, the seventeenth-century Earl of Roscommon, who reiterated this thought of Horace, the Roman poet. Nevertheless, the observation rings true. The quote continues, "True friends appear less mov'd than counterfeit; / As men that truly grieve at funerals / Are not so counterfeit; / As men that cry for hire." John Bartlett, ed., Familiar Quotations (Boston: Little, Brown and Company, 1937), p. 180.

Send a comment to the editors
NEXT IN THIS ISSUE
Testimony of Healing
"As the crude footprints of the past disappear from the dissolving... 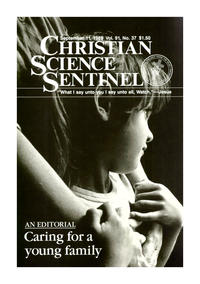