Not long ago we had the opportunity to listen to a group of seven or eight Christians from a large Hispanic community in the United States as they shared some ideas on religion and spirituality. Among the group were a sales manager, a homemaker, a university student, a construction worker, an expectant mother.

All of these men and women had agreed to take part in a research project and had been asked to describe what they would most like to see in a religious magazine designed to discuss spiritual values in today's world. The project was focused on one of our sister publications, the Spanish-language edition of The Herald of Christian Science. 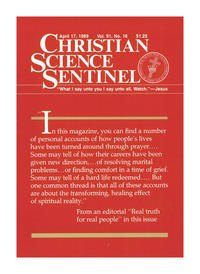