It would be very hard for me to imagine what course my life...

It would be very hard for me to imagine what course my life might have taken had I not become aware of Christian Science early in my college years. Throughout my childhood my mom and dad had imparted to me a deep love of God and a desire to know Him better, but I had become increasingly frustrated with trying to reconcile what I had been learning in school with the rather humanlike picture of God I had been taught.

By the time I was in college I was cynical and agnostic, for I could not see the sense of believing in a mysterious, impotent, and whimsical God. Though I knew the Ten Commandments and had been taught that God is Love, I wanted more than mere belief; I needed to know the "why" and "how" of spiritual law and to be convinced that God wasn't a myth. A passage in Science and Health with Key to the Scriptures by Mary Baker Eddy aptly describes my state of thought at that point. It states (p. 258): "A mortal, corporeal, or finite conception of God cannot embrace the glories of limitless, incorporeal Life and Love. Hence the unsatisfied human craving for something better, higher, holier, than is afforded by a material belief in a physical God and man."

Send a comment to the editors
NEXT IN THIS ISSUE
Testimony of Healing
When I was going to college, it was my duty to introduce to the... 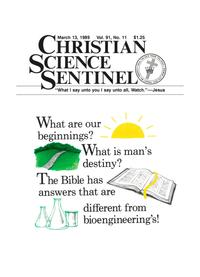